Every community in Massachusetts is part of a regional HMCC; while the specific activities undertaken by each HMCC may differ according to local needs, all HMCC’s work to strengthen public health and healthcare system capacity to prepare for, respond to, and recover from, public health emergencies or emergencies with public health implications. We do this by:

In the late spring of 2018, the HMCC Steering Committee ratified the coalition’s work plan for the coming program year. The work plan  identifies planning and response coordination elements for the coalition to work on in the near future. View the work plan at a glance, as well as introductory documents that explain the HMCC’s role in regional preparedness and response coordination, below.

Western Massachusetts shares borders with four other states: New Hampshire, Vermont, New York, and Connecticut, and has two distinct sub regions: the Pioneer Valley, and the Berkshires.  It has a population of approximately 829,000 people. 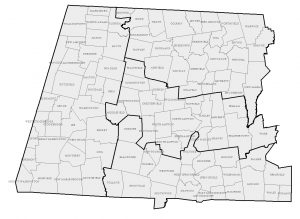 Some of our counties communities belong to the Region 2 (Worcester County) HMCC – namely, Orange, New Salem, Brimfield, Holland, and Wales.

The Pioneer Valley consists of the 69 cities and towns composing the Hampden, Hampshire and Franklin county areas of western Massachusetts. The Pioneer Valley is bisected the Connecticut River, which runs north/south through the entire state.  The flat plains of the Connecticut River Valley contain most of the existing large-scale development, as well as much of the farmland in the region. The cities of Springfield, Chicopee and Holyoke anchor the region’s urban core and are major employment centers, while Northampton and Amherst are the heart of the Five College area and a second concentration of employment and population.

The Berkshire region consists of 32 towns located in westernmost Massachusetts. Elevations range from 3,491 feet at Mount Greylock, the highest point in the state, to 594 feet in Williamstown. Two major rivers drain the region, the Hoosic in the north and the Housatonic in the south. Their adjacent valley lands contain the majority of the region’s development and population. Hills and mountains on the east and west characterize the topography of the Berkshires with flatter lands in the valleys of the Hoosic and Housatonic Rivers. The Taconic Mountains lie along the western edge of the region and the Berkshire Hills lie along the eastern edge.

Membership in the HMCC is comprised mainly of core disciplines that receive preparedness and response funding through the MA Department of Public Health, though membership is open to (and currently includes) other health and medical stakeholders.  The core disciplines are: hospitals, municipal public health, long term care and assisted living facilities, community health centers, Emergency Medical Services (EMS), and regional/municipal emergency management.

HMCC membership is free to any interested public health or healthcare parties, be they individual or organizational, private or public. To join, or address any questions or concerns, please contact:

The Steering Committee provides broad coalition oversight and subject matter expertise regarding their disciplines’ concerns, structures, and regional coordination around preparedness and response.  The Steering Committee ratifies the alignment of priorities for planning and preparedness, and works closely with HMCC staff to maintain a regional Emergency Coordination Plan that meets the needs of the various disciplines and communities in Region 1.

The Region 1 HMCC is sponsored by the Franklin Regional Council of Governments.

Share this page with a colleague
Joining the HMCC costs an organization nothing. Membership ensures you receive newsletters highlighting trainings, resources, and exercise opportunities, and you will be notified as regional or statewide incidents present. Multiple individuals within an organization can join the HMCC to ensure all necessary stakeholders are getting the right information at the right time.
Join the HMCC
FRCOG © 2020. All Rights Reserved. | website by tuman.design
Back To Top
×